This blog story is my very first entry for the Remember the Time Blog Hop. 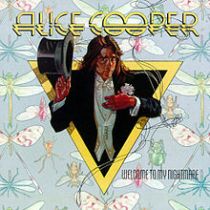 The very first concert I ever attended was none other than the infamous 65 year old, still rockin’ today, (and known to his parents as Vince), Alice Cooper.  Not only was it Alice Cooper, but it was the Welcome to my Nightmare Tour.  The year was 1975 and the day was April 6, two days after my 17th birthday.  The concert tickets, (and the parental escort), were birthday presents and it was for me the very first time I thought my parents could actually do something ‘cool’.  I didn’t have any money and I didn’t yet have a real job so I was totally uneducated about concert events; where they occurred, how much they cost and what went on inside the venues.

My girlfriend and I both were from the small town of Hamilton, Ohio, located a little north of Cincinnati.  I did not yet own a car so my parents offered to drive us down to the concert and pick us up as part of the birthday present.  As I recall the tickets in this instance were assigned seating and so we were located off to the left side of the stage, perhaps 15-20 rows up and maybe 100 yards away from the stage in total.  Alice never just came out and ‘sang songs’.  Alice had created a character and his stage appearances were performances, always complete with great sets, costumes and he always had a theme for the tour.  The late 60’s and early to mid 70’s were a great time for bands and artists to produce entire albums all built around a theme or story line – notably Tommy by The Who in ’69.  Welcome to my Nightmare was Alice’s first effort as a solo artist – and what an effort it was.  It was so successful that he got funding for a TV special, a worldwide tour and a concert film.

Not only were my girlfriend and I entertained with a fabulous stage production, we got to hear some really great musical performances.  One thing I will say about Alice Cooper was that he employed very solid musicians.  The music was flawless and very crisp.  We were introduced that night to another new experience which was rather unexpected and that was free flowing marijuana usage.  We did not expect this – we didn’t really know what to expect to be honest.  But there we were and there it was and it was being passed all around quite freely.  When in Rome – yes, that night we were Roman.  I had smoked before and so I did get affected by it and had to eventually refuse any more free samples.  My girlfriend however continued to accept the samples, but being her first time, she did not get affected (at least that’s what she said).  We were both a bit stunned by the whole evening as every aspect of it was new to us – going to Cincinnati, walking into an arena, attending a concert and then watching marijuana being passed all around us with uniformed policemen less than 50 feet away.  It was quite a new and memorable experience.

Alice performed most of the more favorite songs  from the album Welcome to My Nightmare along with several notable hits from his repertoire, songs like Eighteen, School’s Out and Billion Dollar Babies.  My favorite song from the album and of the night was one of the more lesser known songs unless you are familiar with the album – “Steven”.  I share it here with you (and yes, you will have to suffer through a short ad but please hang in there).

Even today with at least a couple hundred concerts and performances under our belts, the Welcome to my Nightmare concert still hangs up there in my top 5 of concerts I ever attended.

12 comments on “Remember the Time We Attended Our First Concert – How Can you Forget Alice?”