This week’s “Remember the Time” theme is of course about Thanksgiving. When I consider the word ‘Thanksgiving’, I get a warm and fuzzy feeling and the first thing that pops into my mind is either deep fried turkeys in Phoenix with my family or of Grandmas & Grandpas, Aunts & Uncles and Cousins in Indiana. 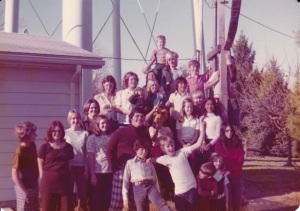 While my mom and dad were married, (and even after she remarried), almost every Thanksgiving we would pack the station wagon up with clothes and kids, (and maybe bottles – read me), and head west from Hamilton, Ohio towards Vincennes, Indiana on good old US Route 50. When you hear the word California spoken, you automatically think of sunshine, beaches and crisp fresh air. You may not know this but Sacramento, CA is on the same line of latitude as Vincennes, Indiana and only 1 degree different for Hamilton, Ohio (mystery solved). So I have a beeline, (albeit a very long one), today from my home in California to my roots in ‘Hamiltucky’.

The Thanksgiving trips ‘out west’ are partitioned in my mind. When very young they are more filled with staying at my Grandma Wyatt’s house when my mom and dad were together. Grandma’s house was tiny, but Dad was more comfortable staying with his own parents than anywhere else. The best image I could muster up which described my Grandma is Willy Wonka! Don’t get confused – Grandma never owned a purple hat or a chocolate factory, but being there was never boring and there was always infectuous laughter. If you’ve stumbled upon my stories for the first time, I hope you take time to read this one as it typifies my grandma – Morning Breeze (read me).

Later after we became the Brady Bunch (read me) I remember more that we would most often stay with my Aunt Frankie and Uncle Fritz, the Hagemeiers. Because the Russo/Wyatt clan was greater in number than the entire population of Freelandville, IN (where the Hagemeiers lived), we would sometimes need to split up the clan so that everyone would have a bed to sleep in (or perhaps no one family could survive the onslaught of our clan).

The 7 siblings minus picture taker Jack 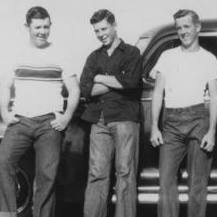 and Jack, on the right

Screw the perfect grammar, the Hagemeiers were a most awesome, awesome family! Aunt Frankie, (Thompson), was the oldest among 4 girls and 3 boys. She married a strong and handsome man named Fritz who was one of those guys who did ‘whatever it takes’ to provide for the family. Over the years he had many jobs – farmer, coal miner, ran a gas station, superintendent of Freelandville water, local county fair maintenance man, and jack of all trades. Together they had raised 5 kids of their own – Becky, Ruth, Ed, Linda & Brenda (twins).

We used to tease about the ‘town’s’ size, (actually I think it was technically a village), but it was because we were all jealous that we didn’t live there. If there was ever a Norman Rockwell stereotypical Americana, never any hassle place to be, it was Freelandville. Imagine one stop light, (which the town erected for appearance sake – there was never any traffic), one open baseball diamond, dozens of houses all with gardens in the back and no one locking their doors at night and you’ve described Freelandville. It was so laid-back that we kids used to argue over who got to turn the hand crank on the ice cream maker out on the back porch. When our time at the ice cream crank was up, maybe we’d get a turn petting one of the bunnies out in their coop. On special occasions, Uncle Fritz might let us count the corn rows! (Ok, so counting the corn rows – I made that one up).

It’s a natural tendency for us to accept and take for granted what we have or were born with. I’m not sure if the Hagemeier kids understood just how lucky they were to have had the parents they had or to have grown up where they did or in the time that they did, but I’m sure they all do today. In terms of role models for me as a man and as a parent before I met my wife, I had a couple of folks I kept my eye on. My step-father Joe I’ve mentioned a couple of times, but I also took note of my Uncle Fritz the couple of dozen visits we made over the years.

My Uncle Fritz towards the end of his grand life

Perhaps it was his quiet demeanor and matter-of-fact way he’d smoke that pipe and would only open his mouth when he had something important to say. Or perhaps it was the way he spoke to me, not as a “boy”, but as a young man during the very few private moments we had. I remember once I followed him out to he corn stalks; perhaps he was trying to escape all the cackling going on by the women in the kitchen. I learned there that only one ear of corn grew on one of those large stalks you see in the fields. He said that corn was a lot like people in that they needed each other in order to thrive – one stalk all by itself would soon die.

But the largest ‘do the right thing’ lesson that stuck out of course had to do with a wintry day in 1976 when they lost their oldest girl Becky in an auto accident. Both she and her husband and one of their three children lost their lives that day as well as 4 more passengers in another vehicle involved in the same accident. The details of that horrible accident are incidental. What is relevant is that two young children sitting in the back were spared; Beth 5 and Janet 1. There was never a question as to what the right thing to do would be – Fritz and Frankie would of course step up and raise the two girls as their own. That was just the type of people they were – duty would always come first for Fritz and for Frankie.

Thanksgiving dinner wasn’t always held at the Hagemeiers’ house. It really depended on the number of the Thompsons that were in from out of town and/or the plans made in a specific year amongst the other brothers and sisters who lived nearby. I remember a dinner or two out at Grandma Thompson’s house, (later purchased by one of the boys), and others at my other Aunts’ houses, (Bev and Carol). Dinner consisted of most of the traditional items like turkey, but I remember a few special dishes; home grown vegetables were always great, veggies like green beans and carrots.

I learned to fall in love with pickled beets from my Indiana visits. Oh I know what a lot of you are doing right now. You’re making sour pucker faces and saying ‘yuk’. But if you happened to walk through the kitchen while the meal was being prepared, hoping to steal a bite of noodles or turkey, pickled beets was all you would get. They were homemade and delicious. I buy the store brands today and every time I eat them, I think of my Grandma’s house. I’m fairly certain that it was my Aunt Bobbie who offered me my first taste of pickled beets while I walked through my Grandma’s kitchen – I was maybe 4 or 5 as I’m certain my Grandpa was still alive. “The” dish however was Grandma’s recipe for egg noodles! I believe all the girls know how to make them today, but back in the day they were always “Grandma’s Noodles”. They made their way to the tables twice a year – the annual Thompson Family Reunion, held around July 4th, and Thanksgiving. We were all very thankful for Grandma’s noodles – no leftovers ever on those babies!

Despite the most awesome Thanksgiving dinners spent in Freelandville, the dinners are not what I remember best. I also remember the layout of the house and yard as if I had a photographic memory – I can visualize everything from the root cellar to the rabbit coops to the narrow stairway that led upstairs to the kids’ bedrooms. I even vividly remember the bedroom in the center of the upstairs, the one without a single window and was pitch black at night, (and Lord help you if you were a sleepwalker in that room with the steep stairway). But the details of the house, as vividly as I think I could describe them is not what I remember best. What I remember best from my Hagemeier visits can only be best described as a feeling of ‘simple joy’. Admittedly, I was 18 when Becky passed and so most of my times spent in Freelandville were from when I was younger but I did spend a number of visits afterwards. For me, nothing had changed there. If anything, I felt more love in the house as a result of two new family members – a celebration of life.

This Thanksgiving for my little family was the first time we only had one child with us. “Our” special dish is a deep fried turkey and it was indeed delicious. As I was eating and listening to my oldest son Mitchell remarking how great the turkey was, I was privately thinking to myself, being thankful for my own children and wife, their health and our good fortune. I couldn’t help at times but to find myself drifting back to a younger day spent in Freelandville, Indiana with the Hagemeier clan when I was a boy.

I hope everyone that has stumbled upon this little account from my memory banks has special people in their own lives and that you have things to be thankful for. I am thankful for having to have been able to spend some time not only with my Hagemeier family members, but with all my Thompson family clan – they’re all “good people”. Everyone is grown now and both Aunt Frankie and Uncle Fritz are gone. We all die. How we die is much less important than how we live. I believe in those words and am trying to live well.