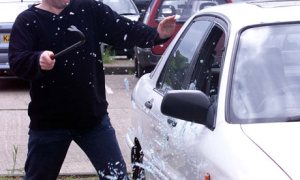 I am in the mood today to write about another adventure from my days at the foundry.  From 1979 to 1987, I worked for a small family-owned iron foundry named The HP Deuscher Company.  Way ‘back in the day’, the city of Hamilton was quite the little industrial center.  There were plenty of manufacturing employers that supplied salaries capable of sustaining a middle income family.  Hamilton was full of middle income families where the man worked at one of these places and the woman ran the household.  Sadly, companies like Mosler Safe, Champion Papers, Fisher Body Plant of GM and Hamilton Foundry are no longer a massive presence.  But you readers all know this as it’s happened everywhere.  Until we rebuild our manufacturing infrastructure, it will be harder and harder to keep 45 million people in this country off of food stamps (yes, that is an accurate statistic).

For the last 4-5 years of my employment with Deuscher’s, we rarely had a week where we poured iron every day.  For the most part, we had cut our costs by reducing our staff and used the remaining staff to pour iron on 3 days per week.  The other days we would use the same staff to shake out the molds and grind the flashing off of the castings.  Often we were struggling just to make payroll.  It was a tough time but I learned a lot from it on a personal level; like how important it was to generate personal options and how to stay entertained during the slow times.

When you work a 5-day work week that could likely be done in 3, you end up first doing all the monotonous ‘clean-up’ tasks you have been putting off for the past 5 years; tasks like rewriting all the customers’ pricing cards, archiving old records no longer needed, counting the number of crows sitting outside on the telephone wires.  Question – What’s left after all of those fun activities?  Answer – Practical jokes.

If you want to read the introductory foundry days’ practical joking story, I offer the link up to you here (read me)

The area where the foundry was located was quite ‘rough’.  It was not an area that you would want to  be caught in at night.  Daytime there was likely not all that much safer.  Although we had a small fenced-in area for employee parking, there were constant reports of break-ins to the cars.  I myself, thinking I had a safe spot in front of the offices, lost half of a dashboard in our 1970 Firebird Formula 400 when someone literally ripped the stereo out of the dash.  He had used a large railroad rock and thrown it through the passenger side door window to gain access to his prize.  So although we all wanted to have nice stereos and wheels for our cars, it was a risky venture if you parked anywhere near 7th and Hanover, where Deuscher’s was located.

One of the laboratory employees for a few years was a young man named Jeff Schell.  Once Jeff bought a brand new car stereo system.  The day after he had it installed, he called us all out to the parking lot to check it out and take a listen.  It was indeed awesome and he was very proud of it.  He was also very scared it was going to get stolen at Deuscher’s….and for very good reason!

When I worked here, used to be many of run down houses

Deusher Foundry was located at the dead end of 7th Street, on Hanover.  Our offices looked directly down 7th Street, predominantly.  The lab itself had a very clear view of the full length of the street all the way down to Walnut St.  This was convenient for a laboratory employee fearing for the safety of his new baby and wanting to maintain some form of watch over its well being.  With that said, Jeff had the smart idea to begin parking directly on Seventh St.

As I made reference above, we had plenty of free time and I admit that it was perhaps a bit juvenile for a man in my role there to confess to you that it was me who was responsible for generating most of the childish pranks.  I like to think, however, that these pranks helped to fuel my ability to be “creative”.  At P&G I was regularly thanked for my ability to generate solutions and options for solving problems.  Perhaps I owe it all to creative pranking!

Jeff’s boss was a guy named Dale Heinzelman.  Dale was a metallurgist by profession, but his passion was raising livestock.  Dale pulled double duty by performing chores with his hogs in the morning and evening.  During the day, he was helping to ensure our iron met quality specifications….oh, and helping me to pull off at least this one prank.

I pulled Dale off to another office and informed him of my plan.  Dale’s role in the plan was to ensure Jeff’s attention was away from 7th St for a couple of minutes and then back onto 7th St at the instructed moment.  First, I needed a disguise.  I had an old Army jacket that I used out in the shop as it protected my clothing.  I put that on and then I found an old winter cap which I placed on my head.

At the designated time, I peeked my head around the corner and gave Dale the signal.  Then I snuck out the front door and hurried down the street.  I was carrying a stick with an orange flag at the end of it.  When I got down close to the end of the street, I held up the stick so that the flag could be seen by Dale.  This was to be the next signal, which was for Dale to call attention to ‘the weird guy’ down the street.  Dale’s line was “does it look like that guy’s looking in the cars?”  Then his next line was “hey, is that your car he’s at?”

While Dale was getting Jeff going, I was taking my big stick and I was acting like I was hitting Jeff’s passenger side window.  The car was parked far enough away such that Jeff couldn’t tell that I was stopping the stick a good few inches away from the window.  To Jeff though, I was banging on his car.

Jeff didn’t know how to respond – he was a bit stunned, according to Dale.  Dale’s version of the account was that Jeff was hopping up and down and just kept repeating, “hey….hey….hey”.  Then he ran into the main office, frantically yelling for someone to call the police because his car is being broken into.  And that is when the snickering began.  There were 3 or 4 people there and they were all giggling.  According to the tale, Jeff then looked around and said – “where’s Rob”?  And that’s when Jeff knew he had been had.  He slunk out of the office and headed out to do a few errands.

When I got back up to the office, I got the accounts from Dale and the others.  We all enjoyed a good chuckle together at the harmless diversion.  Afterwards I walked out to find Jeff.  When he saw me, he was smirking – Good one, Wyatt, you had me going.

Looking back now, some 27 years after leaving Deuscher’s, I can look back on those years with fondness.  They were a bunch of tough years, watching the business go downhill, but I learned a lot about teamwork and leadership…and how to have fun during the toughest of times.