I thought I’d write another more recent story about growing up, learning lessons.

As a very young child, I have a very vague memory of one of our cats getting shocked somehow.  I think it was playing with a thin cord from a lamp or a vacuum cleaner, bit through it and zap!  The cat lived but was a little raggedy looking around the face for a couple of weeks as it had burnt whiskers.  It was lucky to be alive and apparently learned its lesson as it never again played with electrical cords.  If a monkey had been watching this occur, I have no doubt that it would have learned from the episode and stayed very clear of all lamp and appliance cords.  We humans are supposed to be intelligent, at least smarter than cats – perhaps not.

For the last 10 years of my work with P&G, I worked and lived in the Sacramento area.  The office I inherited was furnished with furniture that was probably 20 years old.  It was all heavy wood, not too attractive, but functional.  The telephone ended up being in place for maybe fifteen years before the company finally decided to upgrade the entire phone system.

My desk phone had been in place since maybe the late 80’s, early 90’s and the time had finally come to replace it.  On a scheduled day and time, our local IT guy, (no, his name was not Nick), came by with my new phone.  I asked him what he does with the old phones and he said that they simply throw them away when they’re as old as mine.  We both looked at the massive desk.  I got down on my knees and with all my force, I was able to barely lift and budge one edge an inch or so.  The cord for the phone ran through a crevice where two desk components were joined and we could not see where it ran to behind the desk.

I are a Superrrr Genius

Since he was going to throw it away anyway, I made the brilliant suggestion – why don’t we just cut the cord and then pull it through the crevice.  We won’t need the other half, we’ll just leave it back there.  Wile E. Coyote, Super Genius strikes again!  Nick, I mean my computer guy said – good idea.

I pulled out my heavy duty steel scissors from my top drawer.  I really don’t recall using scissors for anything there but I guess back in the day they were a necessary and standard office component.  Anyway, I pulled them out and applied pressure against the very thick circular rubber cord but  it was so thick that I didn’t cut through it on the first attempt.  On the second attempt, however, KAPOW!!

Stupid us!  That was an electrical cord!  When my scissors cut through the rubber and touched the wires inside, the wires carrying the electrical voltage that is, it immediately arced, sending a quick whiff of ozone our way and carrying the sound of about two firecrackers going off simultaneously. 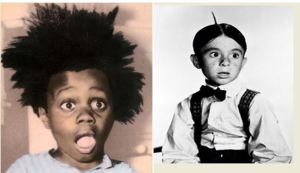 No words are necessary

We looked at each other like Buckwheat and Alfalfa!  Nick the Computer Guy uttered the first words – “wow, I could have just watched you die”.  “I’m sorry, I know those are electric”.

Not a school bus (link), not a drunk driver (story not yet written), not horrible blood clotting (another story not yet written) and not even my superior idiocy of not knowing that my phone was electrified can this Prytania kid get killed.  My time is not at hand for there are quite a number of stories yet to share.  Perhaps when they are completed, my time to go will be soon….either that, or I’ll accidentally step in front of a moving freight train (I’m that smart). 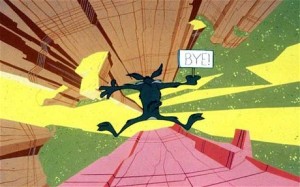 Me Someday, I’m Sure