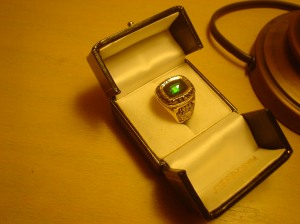 Rings.  For thousands of years, rings have been worn on our fingers as important symbols.  Some are worn merely for decoration and attraction, but for the most part, rings are important and symbolic in nature to the wearer.  I have three rings that mean something important to me.  I have a wedding ring and I have a pinky ring, both given to me by my wife.  The wedding ring is obvious, the pinky was the one given to me as a high schooler when we were steadies.  It will be featured in a later story.

Like most women, my wife wears her wedding ring constantly.  It’s not the original wedding band and engagement ring I gave her when we were only twenty years old, no it’s one a little more fancy.  I have made I guess a little tradition by creating a surprise on every fifth wedding anniversary and it all started on our 15th with a ring.  Let me explain.

My wife’s much better today, but there was a time when she was a little more materialistic than I would prefer.  Occasionally I’d get to hear a little whine – all the other wives have a big ring and my husband works for P&G and I have the tiniest ring…waaaaa.  For a couple of years before our 15th anniversary I had been planning to surprise her with a new ring, but I didn’t want to ever spoil the surprise so if she ever went into whiny mode, I would just egg her on.  ‘I don’t know why the little ring I bought is no longer good enough, isn’t it the thought that counts?’

(By the way, I still think diamonds are a big waste of money).

I would keep egging and keep egging, usually trying to escalate into a small argument.  (I was having fun)

Our 15th anniversary year coincided with the year I graduated from Tulane’s MBA program.  We were living in Louisiana at the time.  Sometime in the Spring, as we were approaching graduation timing, we all, (my fellow class members), ordered a class ring.  I joined in and ordered one too.  I had worked my butt off in that difficult program and the ring was a celebration object.  I ordered a bright jade stone.  Green is Tulane’s color and happens to be my favorite too.  (I mentioned this in my bike story, link).

At the time I ordered my ring, I had already picked out and paid for a ring set for Kim.  I kept it a secret and hidden in one of my drawers and planned to spring it on her around our wedding anniversary which was in October.  Sometime in the Spring, (April I believe), we had a little get together at Dr. Nijar’s house in town.  The doctor, (already a fine surgeon), was a fellow MBA candidate and he wanted to host a small party for those of us who could attend, sort of a mini celebration.  Graduation was just around the corner and we all were beginning to breathe much easier, now that we could see the end at hand.

At the party, everyone who had ordered class rings was wearing theirs, everyone but me.  Mine had come in but I had kept it a secret and it was neatly tucked away with Kim’s surprise ring.  Man, did she get upset with me when she saw everyone had ordered a ring but me.

Oh, I was having fun.  I had almost six full months ahead of me, six months of getting to aggravate my wife about the non-importance of rings.  And I did; all throughout the summer I would look for little opportunities to start mini arguments over why buying a new wedding ring was a dumb idea.  I think it might have been that summer where I earned a reputation, or a nickname, of being a cheapskate.  I was indeed earning more money than fifteen years earlier and I certainly did not spend 3 months salary as the jewelers would have us spending on a ring.  (Perhaps it was three months of Taco Bell salary?)

So for the next six months I had my fun.  When October finally rolled around, I made a reservation for two at the only restaurant in Alexandria where a person might not feel out of place if he were wearing a jacket, Janohn’s.  October can still be rather warm in the south and so I remember well that a jacket was not needed that evening.  Without a jacket, the task of hiding Kim’s ring was on my mind.  It would show a bulge if it were in my pocket, (and I doubt a ring box would look like a banana).  So I put the box inside a little sandwich bag and placed it down into my pants before we left the house.  Note that I still had my class ring hidden in my bedroom drawer.

Janohn’s was just a short ride from home.  Everything was a short ride from home in Alexandria.  During the short ride, I had been giving thought as to the best way to spring the surprise.  I wanted to see the greatest impact so what better way than to start another little debate during our anniversary celebration dinner (I am such a nice husband).

I didn’t want to sit through the entire dinner with a box in my pants, (not to be confused with the famous SNL Justin Timberlake song, you know the one), so I excused myself to the restroom.  I came back out of the restroom with the ring box tucked behind my cupped hand, took my seat and kept the box on my chair out of view.  Then I began to work my magic (I remember the conversation like it was yesterday).

I waited a bit, made small talk about the menu and then:

Me – so, I’m just curious, why is this size of the wedding ring thing seem to be such a big deal?  I just don’t get it.

Kim – I don’t know, I guess it’s peer pressure.  Maybe it’s a southern thing, but all the girls I work with have these big diamond rings and their husbands don’t have as good a job as you do so they look at me sometimes like I’m married to a cheapskate.  It’s just embarrassing I guess.

I dragged it out a bit more and then after perhaps five minutes of discussion, I said:

Me – so what you’re really saying is that I’m cheap, that you could never see me being the kind of person who could let loose once in awhile?

Me – (thinking this was perfect), so….huh…maybe I am a cheapskate.  Well let me ask you….would a person as cheap as I seem to be ever go out and buy something as nice as this?

And with the word “this”, I had brought out the box and flipped it open to reveal a nice diamond ring and wedding band set.  You know the kind, nice looking diamond in the center, surrounded by tiny rubies and tinier diamonds.

BINGO – instant tears.  She was shocked, she was tongue tied.  The reaction I got was perfect, one I can clearly still visualize today as I sit here writing this story.  The moment and reaction was well worth the aggravation of months of minor anguish during the ‘debates’ and so worth the price tag that the ring came with.

I understood.  Most, (maybe all?), of us men just do not appreciate the significance of the diamond ring.  As a finance trained guy, it’s hard for me not to mentally calculate the future value each time I write a check for big ticket items like a car or a new roof or a diamond ring.  Somewhere along the line of growing up though, I realized that for a lot of women, the ring is more than just a symbol of status; for a lot of women, a diamond ring symbolizes an unbreakable symbol of love.  The larger the diamond in comparison to the cheapatude of the buyer, (me, the cheapskate in this example), then the greater the proof that we love our women and are here to stay.  (And if not, it gives them something valuable to cash in at the pawn shop). 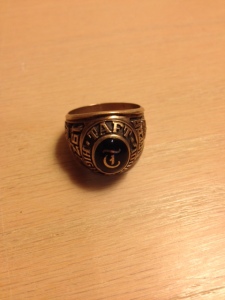 When I look at my gold high school ring, I wonder when gold is going to rise to $2000 per ounce so I can sell this thing.  Graduating from high school wasn’t an accomplishment; they kicked me out the door, glad that I did not burn down the school (link).  My MBA ring though signifies for me a grand accomplishment, a struggle that I took on and survived.  When I look at my wedding ring, I think back to a couple of twenty year olds hopping into a freshly waxed 1974 Camaro, being whisked away to our much simpler apartment life of Big Boys and Hot Fudge Cakes at midnight.

What do I think of when I look at my little silver pinky ring?  Well…that’s a story for later dear readers.  Stay tuned in the future to learn why my silver pinky ring is the most important symbol of my love and what it has to do with growing up on Prytania.

Thanks for hanging in there with me.

2 comments on “Rings – Important Symbols or Just Ring Around the Collar?”