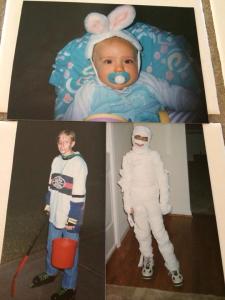 The poor innocents – my boys

I really appreciate the encouragement to continue writing these little excepts from my rusty old memory bank.  Honestly, I never…..NEVER expected to be sitting here after having written 200+ real life stories! When I was young, I was a true left-brainer, a real math geek.  I mean, seriously – I could prove out a Calculus theorem in nothing flat, but put me into a literature writing class and my palms would get sweaty, my nails chewed off and a few Excedrin downed.  So I continue to amaze myself when I get excited about the prospect of writing another new story.

The other day, (at the time of this writing), another deranged person took it upon himself to take out a bunch of innocent people with his assault rifle; this time in a small Texas church.  Immediately after the event I went onto Facebook to make a heartfelt post, telling my few friends that I think of them and that they are special to me. Obviously, the shooting put me into a very introspective mood.

Even though the recent news was upsetting, my introspection took me to a happy place.  Despite my hardships, (my close calls with Dr Death), I have to feel thankful for my good fortune.  I’ve accomplished my major life goals and I’m relatively healthy. In fact, this past decade has been my happiest.  True, I worked very hard to achieve my goals but still, all of us need a little luck on our side.

So, what’s the secret, Rob (you ask).  Well, in my case it was a consistent application against educational goals.  Three degrees and three professional certification tests took massive amounts of effort and time but those pieces of paper helped to get my foot in the door of each and every different aspect of my varied professional career.  The money then that came with each avenue allowed me to provide opportunities for my kids.  Those opportunities were the major bases for my life goals.

And it all began with a little degree earned via correspondence.  I first wrote about having to leave Miami University of Ohio and finding the correspondence course in the story that ended my little saga documentary for finding my wife (link).  In this month’s story, I’d like to write more about that episode of life, what I remember most from that time.

The school was called ICS, International Correspondence School.  At the time, they offered two different accounting programs.  One was mainly a bookkeeping training program and the other was an Associate Degree program, more expensive than the other.  A lot of the coursework between the programs overlapped and shortly after signing up for the bookkeeping program, I bit the bullet for the more expensive degree program, thinking that it would better position me for possible further education later.

When I began the program, I was working at Taco Bell.  Soon though, I was “fired” (link) and within two weeks I landed the clerking job with H.P. Deuscher’s where I continued working hard against this correspondence degree.  Even sun poisoning in Clearwater Beach could not deter me.  I began working at Deuscher’s in early ’79.  We were generally busy in the early 80’s so I worked hard during the day and then would continue with my studies each and every night, mailing in each of the required tests to be graded.

Overall, the program took a little more than 2 years so as 1981 was turning the corner, I was beginning to look seriously into the next step with the University of Cincinnati.  But before I could enroll and transfer my credits, I had to get through the final exams which had to have a proctor.  Who did I turn to?  But of course, Mr Adams, one of the most beloved elementary teachers of the day in Hamilton. (Link) I had a great respect for Mr Adams and as such, I would reach out now and again to say hi.  He didn’t hesitate when I asked for this favor and the first day I showed up for the first exam, he had a nice quiet room set up for me.  It was complete with a table and chair, pencils and erasers.

There was a catch however and I discovered it within the first five minutes; I was not mentally prepared.  I had studied but when I opened the booklet and read the first problem, I either froze or just totally blanked out.  I called out to Art, (Mr Adams), who came in quickly and I asked him if the rules allowed me to leave if I had not yet begun.  He looked in the materials and said, yes, I could leave and return another day.  Today, I’m sure that would not be allowed due to cameras on our smart phones.

In hindsight, I think I froze up.  This was important to me.  I didn’t feel fortunate like many of my peers who had been able to go off to a “real” college and I guess the pressure I had put on myself just got to me.  Mr Adams allowed me to reschedule for the following Saturday but before I left, he gave me a few words of encouragement.  I don’t recall the exact words he used, but I remember standing in his doorway and his using my name:

You were always one of my brightest pupils, Robbie (I bet you say that to all the boys). Just relax and come back next Saturday. I’m sure you’ll be just fine.

And I was.  I didn’t even study that week.  I just came back and blew through the test, finishing up in half the allotted time.  The next couple of tests were similar, no problem.  When I received my results, (and my degree), in the mail, I didn’t just pick up the phone.  I drove out to see Mr Adams one weekend afternoon while my wife was at work.  It was late summer and I had my little boy Mitchell with me.  He was just a baby then.  Mr Adams and his wife had never had children and I thought maybe they’d enjoy holding a little one.  I spent maybe 30 minutes there, thanking Art for the help and enjoying the looks on their faces as they took turns holding Mitch.

Like all of you out there reading this, I’ve had my share of hardship and rough times.  In my case, there were even times where today I look back and think to myself – I should not have lived through that, I am lucky to still be here.  While it’s true that I worked very hard throughout my life, earning these degrees and certifications, I had help.

I had a teacher who cared for kids, one who loved children and was never fortunate enough to have his own.  I had a mom who saw a commercial on tv and was pushy enough to call the salesman to the house for me.  Mostly though, I had a wife and kids who understood the importance of what I was working for.  They gave me the space and support I needed to accomplish my goals.

As I’m finishing this little story, my left leg and knee is acting up – something is going on (feels like bone against bone).  I had an ultrasound the other day and it reported clotting but couldn’t tell me how new or old.  Next step is a visit with my orthopedic doctor.  My Sacramento doctor once told me that I would know when it is time for surgery.  Perhaps that day is drawing closer.  Things like surgery do not scare me like they might scare others.  Oh sure, I would not want something to go badly but I feel fortunate in that I’ve escaped previous episodes that could have ended up without life or limb.  Often I’ve felt I’m living on borrowed time.

The time I’ve had so far in this life has allowed me to achieve my primary life goals, those of providing for my children.  My wife and I have enjoyed more than forty years of love, work and struggles together and now are having a nice time in semi-retirement.

I’ve said this many times and if you are a young reader who has found this story, this next message is particularly pointed at you – always be learning!  Learn skills, trades, information, but mostly – learn about yourself, learn about life.  I’ve always believed that the more we learn, the easier it is to figure out how to find what makes each of us happy.  Even a little seemingly insignificant correspondence degree just might be the stepping stone you need for that next major chapter in your life.