It’s happened – I’m officially old.  Why do I say this, you may ask?  Because I’ve turned into one of the people I used to think was old when they said things like, ‘the good old days’ or ‘things were better then’.  Well….other than 1968…..maybe they were…

The 60’s were the days of black and white TV and only 3-5 channels; heck, we were happy to watch a talking horse on television and bullets that killed without ever shedding any blood.  These were the days of opening up your front door and kicking out your kids, telling them to be home before dark….and never thinking twice about things like child abductions.  We didn’t talk about it at school, we didn’t talk about it at home.

These were also the days of corporal punishment in the schools.  Let me tell you, not only was it accepted, it was encouraged….by us kids!  Believe me when I say to you that we kids were much more scared of getting whipped by our dads than a few measly swats from a piece of lumber wielded by any of our teachers. Umm…unless of course that teacher was Mr Deaton; Wilson Jr High teacher of American History and man of tree-arms.  Do I really need to say this?….I was always on best behavior in Mr Deaton’s class; definition of model student.

I wrote about my first exposure to school swats in the ‘Dale the Whale’ story (link).  I wasn’t really a bad kid.  I just had friends who, like me, who enjoyed showing off for others and making them laugh.  Unfortunately, the things that would make our classmates laugh, would also often times be accompanied by the potential for punishment from a teacher.

The trick really was to plot out the adventure and then hope like hell that you didn’t get caught.  And then of course there were the teachers that were either oblivious or didn’t care to take it to such an extreme.  I figured the day we almost burned down the school, (link), we were certainly in for a swatting or possible suspension but luckily for us, the teacher was a pot smoking hippie who simply told us we shouldn’t heat up alcohol.  Good point – I’ll try to remember that.

I guess I should have received many more swats than what I ended up with.  I think I only received swats on 4 occasions, each one however was memorable and deserved…except possibly the time I was swatted by the wood shop teacher, Mr ‘R’. I know Mr R is still alive so I’m going to keep his identity secret, lest he decide to sneak up on me again. 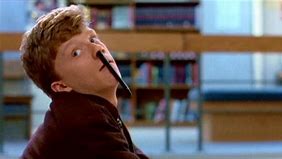 Pretty much me in Jr High

Shop classes were mandatory for us kids.  For sharp left brainers like me, they were the cause of much stress and angst, (think, the Brain in Breakfast Club who brought in a flare gun because his elephant lamp didn’t light).  I was not that great with my hands and those classes were very good at highlighting just how much of a doofus I could be.  What does an inadequate doofus do then so as to avoid public embarrassment?  He makes people laugh.  A wit I had, (a thick butt I did not).

Unfortunately though, shop classes really were not the right place to show off.  Those rooms had real equipment and tools in them, tools that could cause a kid to lose a finger or a hand.  The teachers of those classes took control of their rooms and their classes from day one – they made it very clear that they were in charge and that there would be severe consequences for anyone who screwed around.

Maybe I was a bit of an idiot but as I was staring at the base of some kind of saw attached to a large bench, I couldn’t figure out why there was a small ‘screw’ or nail apparently punched into the base.  So naturally, I reached out to remove it.  Oops – I guess perhaps I should have been paying attention to the lecture that was going on instead of trying to tidy up the equipment.  That little ‘screw’ was simply a power switch for the saw.  Thankfully no other idiot had his Jr high hand anywhere near the blade when this idiot tried to lift that screw.

Except for the rapid whirring of the saw blade, the class went silent.  I immediately flipped the switch back of course, but the damage was done.  Mr R simply looked at me and said – Mr Wyatt, come back to my class at the end of the day.  As 15-20 sets of wide eyes and open mouths stared at me, I knew I was in for it.  Not only was Mr R young and strong, he was also one of those teachers you had who acted like he was better than he was; like perhaps he thought that teaching would be easy and so you got the impression that he had a bit of a chip on his shoulders.  In any regard, I knew I was in for it.

Throughout the day my friends all told me I should not go back, that Mr R would simply not remember me.  Me though, I guess my dad had me trained.  When we were younger, he used to entertain his friends by showing them how he had us kids trained to run to him for our whippings.  The first to arrive got the easiest whipping.  I figured Mr R to be one of those types of guys and maybe he would go easy on me when he saw me show up immediately after the last bell of the day.

I was wrong.  He wasn’t that type of guy, he was worse.  He was the type who swatted until he saw a tear.  You younger readers probably think I’m making this up, but yeah, teachers could swat us…and this was wood shop after all so Mr R had a very nice and powerful wooden executioner that was perhaps 24-36 inches in length and an inch thick.  Oh, and it had nice round holes in it to aid the aerodynamics, allowing a more forceful impact.

After assuming the position, I saw him quickly study my face after the third swat.  No tears! Hey, if my own dad couldn’t get a tear while using a weeping willow branch on my bare legs (link), there was no way in Hell this guy would succeed.  After swat number ten, I think he realized this as he stopped and simply told me to get out and not to ever “do that again”.  As I walked out, I recall thinking to myself – I wonder if he even remembers what exactly I did.

I deserved the swats, but not ten of them from a guy swinging with apparent intention to harm me.  Maybe Mr R was in a bad mood that day, maybe he just didn’t like teaching, maybe he thought it was going to be a fun job and then discovered he really had to work.  Regardless, boy, did my rear end hurt for the next week.  Naturally I didn’t tell my parents about that.  I was at the age where kids told parents only what they wanted to hear.

I had my first really long walk today since my surgery seven weeks ago.  I had a total knee replacement because the cartilage had worn completely away over the past 20 years after a bad softball injury.  Times like these really help to put everything else into proper perspective.  Every generation speaks about their own ‘good old days’ but were they really better?  I don’t know; I guess some things were better, some not so good.  If you ask me today if I’d support corporal punishment in the schools, I’d have to say ‘yes’.  The threat of a hard wooden paddle hitting my rear end kept me mostly on the straight and narrow….mostly.

Were times better or could it be that we all long to re-enter the world of our youth; the one that was so much tinier and far less scary.  I love my life when I’m healthy…but for all of us who sometimes get nostalgic, there is this:

“And when we grow to be men and live under other laws, what remains of that park filled with the shadows of childhood, magical, freezing, burning?  What do we learn when we return to it and stroll with a sort of despair along the outside of its little wall of gray stone, marveling that within a space so small we should have founded a kingdom that had seemed to us infinite – what do we learn except that in this infinity we shall never again set foot, and that it is into the game and not the park that we have lost the power to enter.”